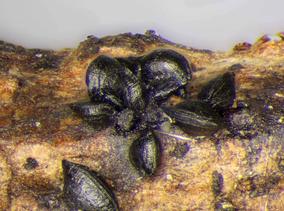 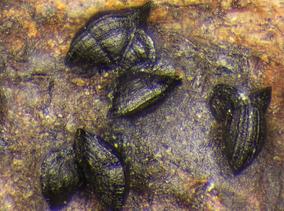 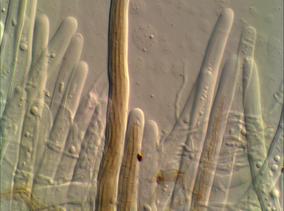 Anamorph: Papulaspora- and Phoma-like.
Teleomorph: ascostromata hysterothecia with an inconspicuous longitudinal slit, elliptical (sometimes narrowly so) from above, widening upward from a narrow base to a longitudinal ridge when viewed from the side and ± ovate in vertical transverse section, black, smooth, sometimes concentrically striate, superficial, scattered, in no particular alignment. Peridium with side walls thin, brittle, at the base composed of fused interwoven red-brown epidermoidal cells, composed of parallel hyphal tissue above, at the slit margin perpendicular and markedly elongate-parallel, with a layer of interwoven hyaline thin-walled hyphae forming the floor of the cavity. Interascal tissue composed of filiform pseudoparaphyses with rounded ends, hyaline, smooth, sparsely septate, branched and anastomosed, exceeding the asci and plugging the slit when dry. Asci cylindrical, tapering to a lobed base, fissitunicate, the apex rounded, I-, 8-spored, arising from croziers and in parallel from the cavity floor. Ascospores lying parallel and remaining straight or becoming helically coiled in the ascus at maturity, filiform, very long, yellowish to pale brown, smooth, many-septate, not constricted at the septa, without a gelatinous sheath or appendages.