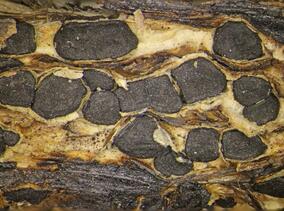 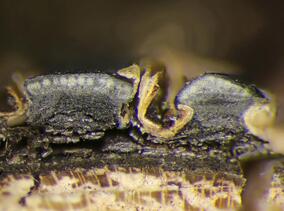 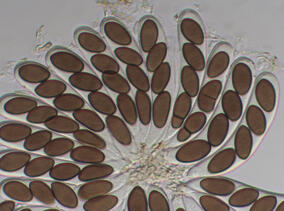 Anamorph: not known.
Teleomorph: stromata 0.9-1.9 mm diam., somewhat irregular in shape but usually roughly circular in outline or broadly elliptical with the long axis parallel to that of the host, erumpent through the periderm, often clustered and sometimes juxtaposed, then irregular in shape but not coalescing. Surface irregular but ± flat, strongly roughened, the individual locules sometimes visible as low mounds but the ostioles not visible from the surface. Stromatal tissue composed of thick-walled, dark brown to almost black angular to globose cells (8-) 11-16 µm diam., with Munk pores ca 0.75 µm diam. visible in some side walls. Outer layer hardly differentiated, but with an epinecral layer of dead occluded and flattened cells present in some parts of the external wall. Ascomatal locules up to ca 20 per stroma, 80-110 µm diam., in a single layer, without separate walls but lined with two or three layers of internal tissues similar to those of the stroma but less strongly pigmented. Interascal tissue not present. Asci formed in a fascicle from a small rounded cushion of generative cells, 78-87 x 15.5-17.5 µm, cylindric-clavate, almost sessile, tapering gradually to the base, the apex rounded, thick-walled and fissitunicate, with a very broad shallow ocular chamber, not staining in iodine, (2- to 3-) 4-spored. Ascospores arranged uniseriately, (16.5-) 18-21.5 (-26.5) x 9-11.5 (-12.5) µm, somewhat irregular in shape but mostly ellipsoidal to ovoid, sometimes somewhat inaequilateral, the apices rounded to obtuse, almost all (ca 95%) aseptate but with a small proportion (many of these in asci containing fewer than four spores) with a ± median to strongly submedian septum, that may or may not be constricted; dark chocolate brown, thick-walled, smooth, without a gelatinous sheath or appendages.