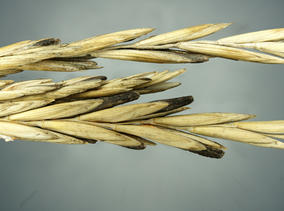 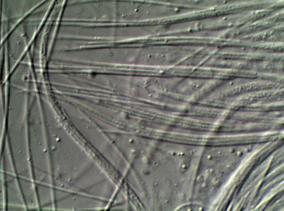 Colonies are initiated by infection of host ovaries, apparently by both conidia and ascospores, and transformation into a stroma composed largely of fungal tissue. The anamorph (Sphacelia) develops on the surface of the stroma, which subsequently transforms into a sclerotium. The sclerotia overwinter and several stalked teleomorphic stromata develop from each sclerotium the following spring.
Anamorph sporodochial, formed as a compact palisade of conidiophores that extends over the stroma surface which then becomes involuted into labyrinthine chambers. The conidiophores proliferate percurrently to produce conidia, which ooze from the stroma as honeydew that attracts insects that then visit and infect other florets, and may also be transmitted via rainsplash. Conidia 4-6 x 2-3 µm, ovoid to bacilliform or shortly cylindrical, sometimes slightly constricted in the central region, hyaline, thin-walled and aseptate.
Sclerotia cylindrical, often tapering towards the apex, variable in size, usually ranging between 6 and 20 mm long and between one and four times the length of the host seed, often curved; dark purple to black and sometimes somewhat paler in the apical region, pale grey to white internally, usually longitudinally wrinkled and rugose in the apical region where the anamorph has formed.
Teleomorph: stromata 1.5-2.5 mm diam., ± globose, pale brown to orange-brown when fresh, with a long purplish fleshy stalk 400-600  µm diam., the length very variable and dependent on environmental and positional factors as well as sclerotium size; the stroma surface dotted with mid to dark brown, weakly to strongly papillate ostioles. Ascomata numerous, 150-250 per stroma, ovoid with a somewhat elongate neck region. Interascal tissue not seen. Asci 130-150 x 4-5 µm, narrowly cylindrical, thin-walled and not fissitunicate, with a conspicuously thickened capitate apex that is penetrated by a narrow channel, 8-spored. Ascospores arranged in a fascicle, not helically coiled, 75-90 x ca 1 µm, filiform, apparently aseptate when discharged, hyaline, thin-walled, without a gelatinous sheath or appendages.